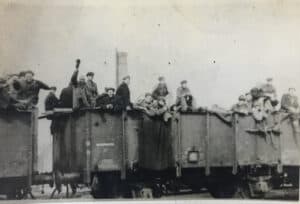 In August 1945, the Prague office of the United Nations Relief and Rehabilitation Administration (UNRRA), informed Leonard Montefiore that in the Czechoslovak capital, and in the former Theresienstadt ghetto, now a displaced persons’ camp, there were youngsters who were fit to travel. They were a large unit who could be moved as a group. They would become the first group of The Boys to be brought to the UK.

The RAF were repatriating Czech servicemen and Montefiore rushed to the Air Ministry to persuade them to fly the children to the UK on their return trip.

Most of the Boys in the August transport were not Czechoslovak citizens. As a result, the Czechoslovak authorities were keen to see them leave the country. There was thus no opposition from the government to UNRRA, the American Jewish Joint Distribution Committee (JDC) and the Central British Fund (CBF) arranging to fly the children out of Czechoslovakia.

The number of children the CBF could take depended on the number of planes they could manage to clear with ministerial officials in London. Not all the children who applied for a visa were allocated one, and many of those who hoped to go to England were left behind. The CBF hoped to bring those children, many of whom were transferred to Deggendorf Displaced Persons’ Camp in the American-occupied zone in Germany, to Britain on later transports. However, they were not able to do so as their removal was blocked by UNRRA aid workers and the Zionist Central Committee of the Liberated Jews of Bavaria.

THE BOYS FROM THERESIENSTADT

Theresienstadt (Terezin in Czech) is the German name for the former garrison town that was used as a ghetto, labour camp and Nazi propaganda tool. It holds a unique place in the history of the Holocaust and played a vital part in the story of The Boys.

Almost 50 of the Boys spent a number of years in the Theresienstadt ghetto, but the majority of them were teenagers, who had been forcibly taken there in the closing weeks of the war in the spring of 1945.

The majority of the Boys who were liberated in Theresienstadt arrived in ‘death marches’ either on foot or in open topped railway wagons. According to Simon Klin, one of the Boys, as they walked into the ghetto Czech Jews dropped lumps of sugar tied to pieces of string out of the windows to help them.

Many of the new arrivals refused disinfection treatments and the testimonies of many of the Boys reveal that they were convinced that the Germans had brought them here to be gassed. A gas chamber had been built in February 1945 but was never used.

Thousands of seriously ill prisoners who flooded into Theresienstadt brought with them typhus, which spread rapidly. To find out more about Theresienstadt click here.

Although many of the Boys were close friends by the end of the war, they were not yet one unified group. It was the actions of three young men from Piotrkow in Poland that kick-started the story of The Boys.

Sam and Isidore Rosenblatt had survived with their younger brother Herman Rosenblat  and became aware that there were many unattached and bewildered orphans wandering around the camp who were not lucky enough to have older brothers. With the help of the Red Army they managed to house the teenagers in a barracks on their own. The two brothers moved in to oversee the boys and girls, as did Isaac Finkelstein, who had survived with his younger brother Sevek Finkelstein, now Sidney Finkel.

The camp authorities assigned two German women to care for the youngsters. Etta Veit Simon was half Jewish and her mother Irmgard Veit Simon, a Christian. Etta had been sent to Theresienstadt in 1942 with her sister Ruth, who died there in 1943. When the war finished Etta was put in charge of a group of Jewish German children being repatriated to Berlin. When she arrived home, she discovered Soviet soldiers had raped her mother, so she brought her back to the comparative safety of Theresienstadt.

Just as the repatriation of survivors to their home countries got under way, David Graham, a BBC reporter, arrived in Theresienstadt and his dispatches brought news of the survivors’ plight to the attention of the British public. Not long after, Leonard Montefiore, who had drawn up a plan for the CBF to bring child concentration camp survivors to Britain, was notified by UN officials in Prague of the Boys’ presence.

A UN Relief and Rehabilitation delegation soon arrived in Theresienstadt to verify that the children were suitable. Solly Irving, one of the Boys, was picked to welcome the guests. “I was handed a piece of paper telling me what to say,” he later recalled. “I had no idea what I was saying. It was all phonetic English, but everyone clapped when I’d finished speaking.”

Edith Lauer, a former prisoner oversaw the care of all the 2,000 children in the former ghetto and was allotted the task of drawing up a list of the 300 children who would be chosen to come to Britain. Her husband George Lauer was a chemist and had worked in the ghetto sanitation department and had been asked to stay behind to help contain the typhus epidemic.

On 10 August 1945 word arrived that planes had been found that could transport the children to Britain. The Boys left Theresienstadt on foot on 11 August and walked to the station in Litomerice. Edith and George Lauer were in charge of the group. Two extra carriages had to be added to the train to accommodate them.

It was a slow train that made numerous stops. At each, George Lauer remembers how the children jumped off and started running around. On arrival it was found that two of them were missing. They were later found by a station guard and brought to Prague.

Bad weather delayed the flights until 14 August. The Boys were taken to Prague airport in buses. At the time the airport was under the control of the Allies; the Americans, British, French and Russians each had one section of the airfield. The nine planes were bombers and had all kinds of openings and bomb doors that the children could fall out of, so an adult was placed in each plane to supervise the trip.

Bertha Bracey, a Quaker aid worker, had flown from England to supervise one flight. Also in charge were the two Rosenblatt brothers and Isaac Finkelstein. Etta Veit Simon and her mother also flew with the Boys. George and Edith Lauer flew on the last plane with the youngest children. She would later care for some of the children at a hostel for younger children called Weir Courtney, in Lingfield, in Surrey.

The first group of the Boys were flown to Britain in Royal Air Force Stirling bombers and landed at Crosby-on-Eden, near Carlisle, on 14 August 1945. From there they were taken to a reception centre near Windermere.

The German refugee psychologist Dr Oscar Friedman was appointed to head up the team looking after the children.

Originally, 300 names had been placed on the list but there was a stowaway, which took the number of survivors to 301.

The list of the Boys has 303 names on it to date. It is believed that some of the Boys may have in fact swapped their papers with friends who came in their place. They gave their real name on arrival. This happened in a number of cases in the first two groups of the Boys. 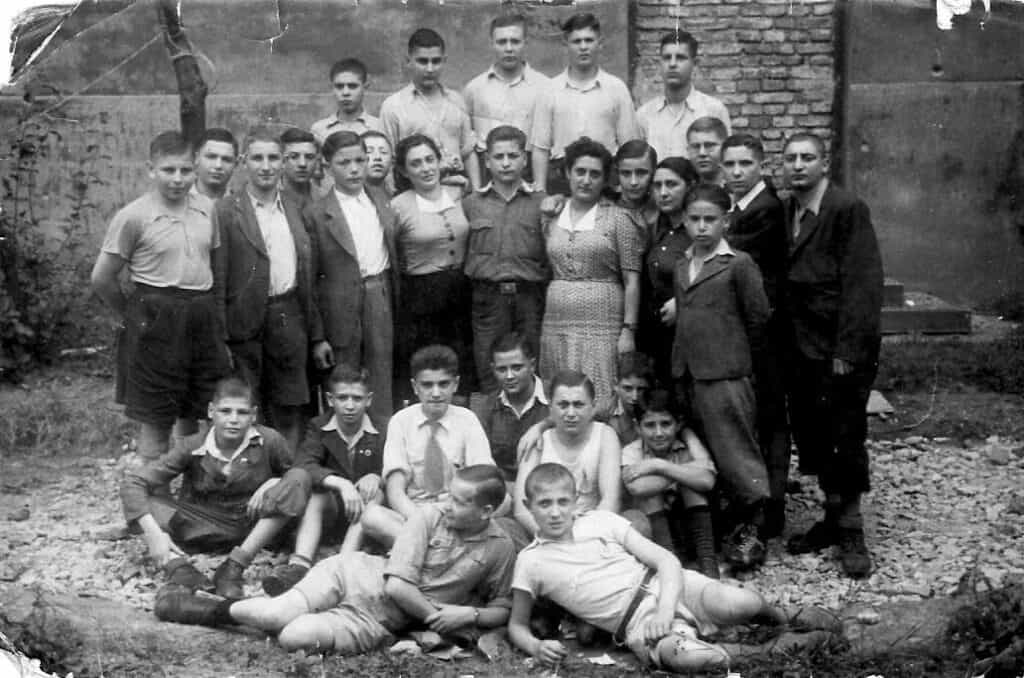 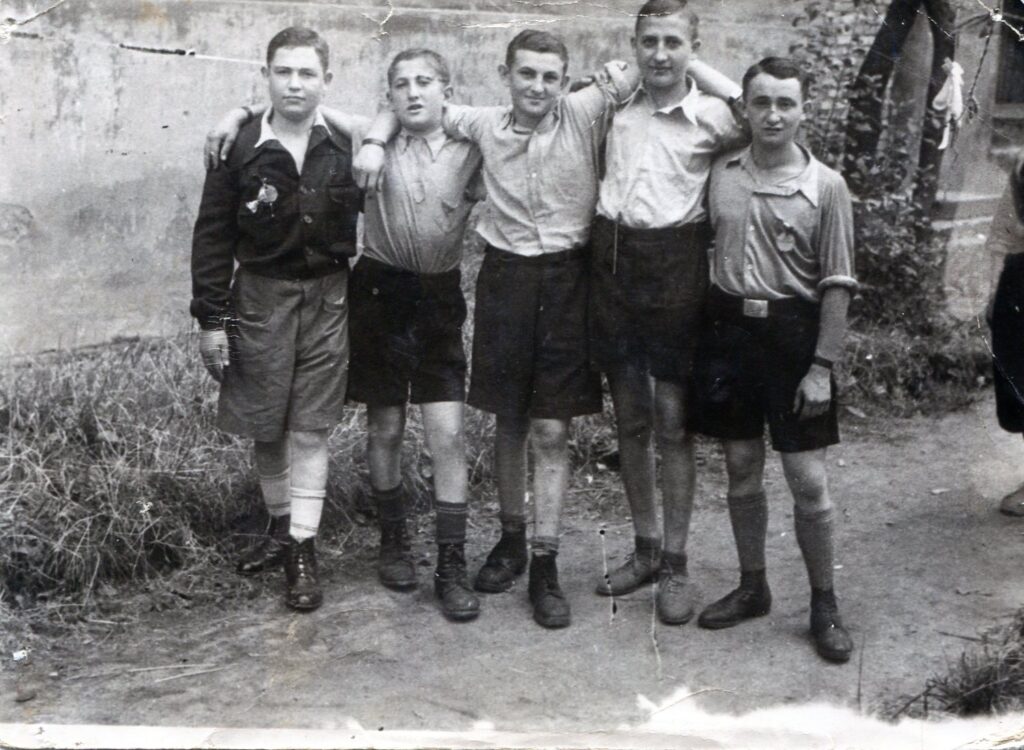 The Lojovice children's home, south of Prague, where some of the youngest members of the first group were cared for by Presmyl Pitter before departure for the UK. Photo: Rosie Whitehouse.