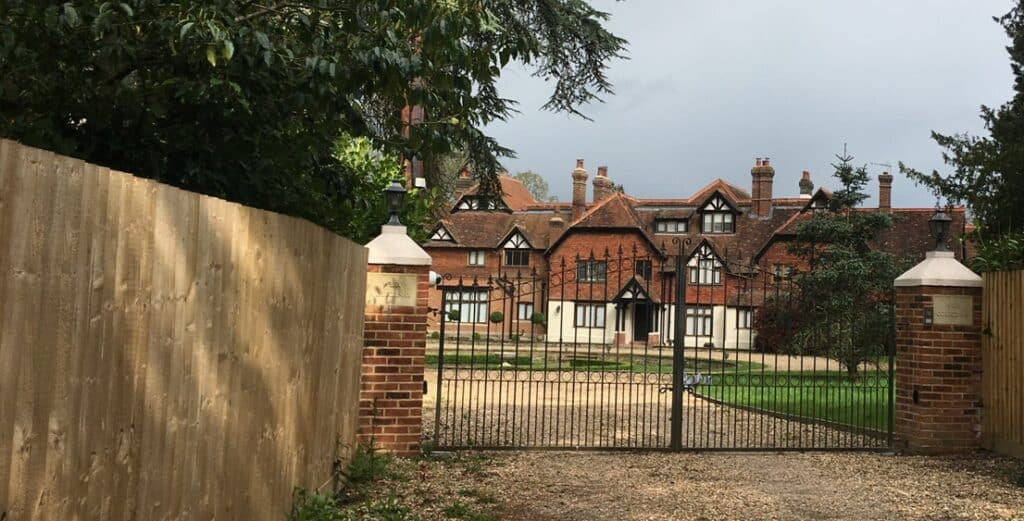 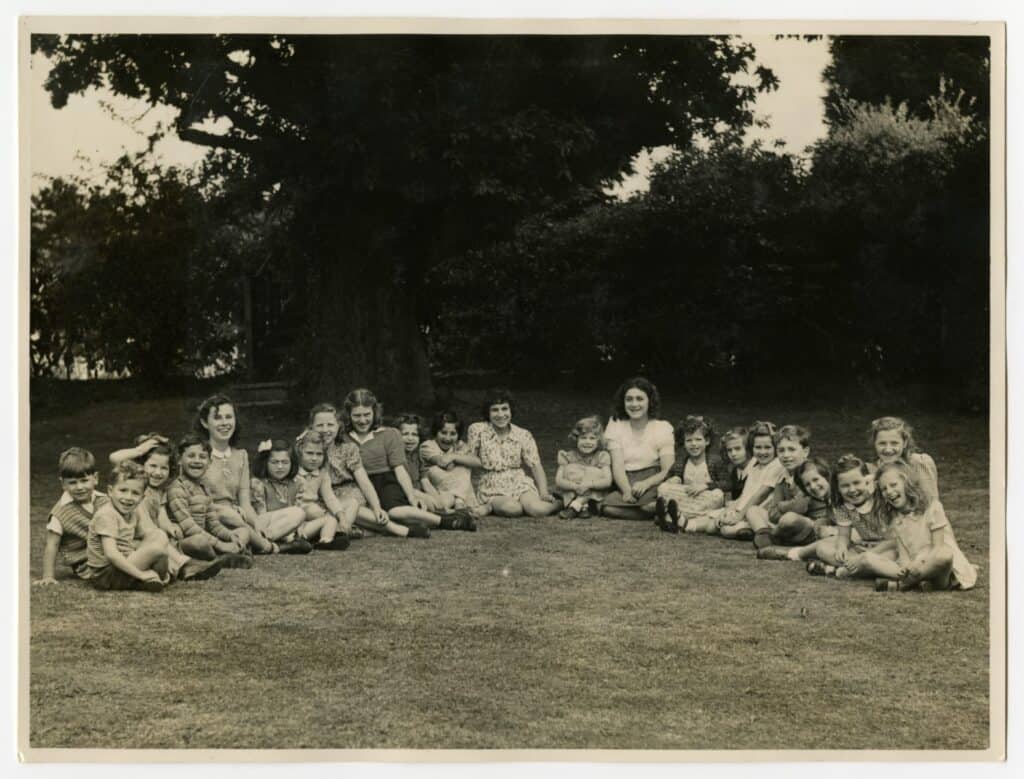 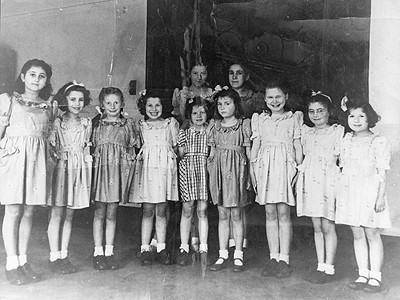 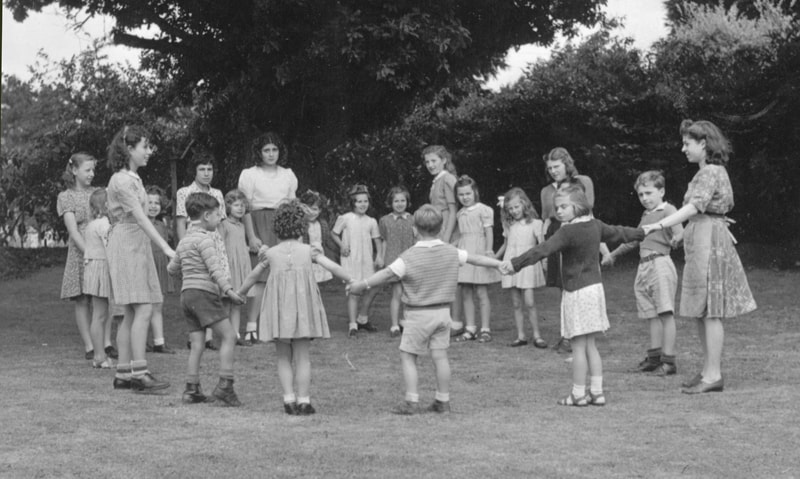 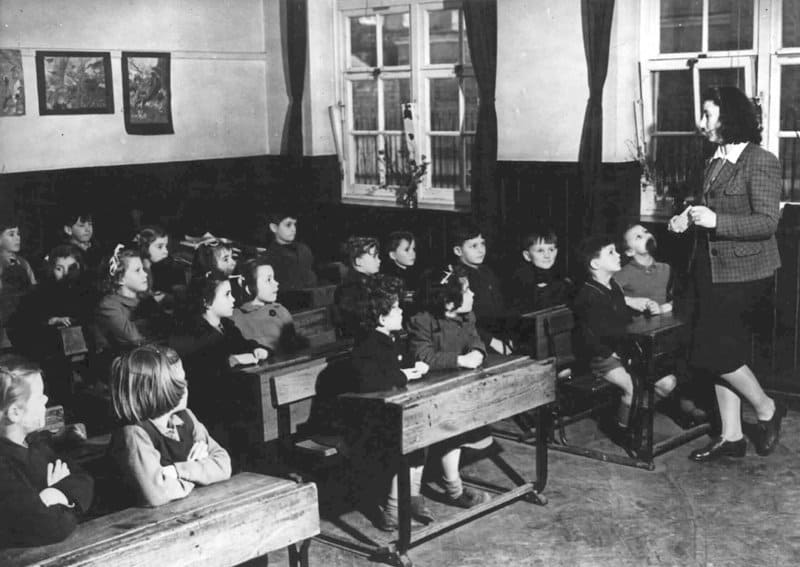 Weir Courtney was a large country house outside Lingfield, a village in the county of Surrey, about 40 kilometres south of London.

Weir Courtney stood on a gentle rise surrounded by fields, woods and orchards. It had three floors and 26 rooms and backed onto the Lingfield racecourse. Situated slightly outside the village of Lingfield, the property today is surrounded by fences. It gives the impression of having been a secure and secluded place to house the child survivors.

The house was built as a family residence, probably in the 1880s, but has a history as a place of sanctuary. From 1898 to 1901 it served as temporary accommodation for destitute and elderly clergymen.

In 1930, Weir Courtney was purchased by Sir Benjamin Drage as a weekend and holiday home. On the outbreak of war, the house was home to several evacuees and between 1942 and 1943 it was also used as a war nursery.

The houses still exists. The estate at Weir Courtney has been divided up and there is a new house built in the grounds.

At the end of the Second World War, Sir Benjamin and his wife leased Weir Courtney rent-free to the Central British Fund as a home for a group of some of the youngest Holocaust survivors arriving in Britain.

The hostel was financed by the West London synagogue and initially also received financial support from The American Foster Parents Plan.

The majority of the children cared for at Weir Courtney were between three and eight years old on arrival in England in 1945, and were of German, Czech, Hungarian and Italian origin. Many had been in hiding during the war or had survived the Theresienstadt ghetto or the Auschwitz-Birkenau concentration camp.

The hostel was run by the child therapist Alice Goldberger, who was also a Jewish refugee. The first group from the Windermere reception centre arrived on the first evening of Hanukah, December 1945. The house was full of people to greet them including members of the West London synagogue. Rabbi Reinhart led the lighting of the candles.

In her first report to sponsors in April 1946, Goldberger reported that the children at the ‘Lingfield Colony’ had started at the village school a few weeks after their arrival.

Records of Jewish children from Weir Courtney appear later in the 1947 Dormansland school registers held at Surrey History Centre. They recall that they sat alone and were referred to as the German children.

The first group of children were followed by two further groups in 1946. Some of the children believed Weir Courtney was a Nazi trick and took time to settle.

The children were petrified of dogs and the appearance of German prisoners of war, of which there were many in the locality. They were also disturbed by rumours in the press that Hitler was not dead. Goldberger would pull out her harmonica to calm the children when they became agitated.

They ate dinner at eight separate tables and Goldberger would take turns to sit at each. On Friday night and Saturday lunch the tables were all put together and Alice sat at the head of the table. They had orange juice, chicken and an individual challah.

At night, the children would say the Shema Yisrael before bed and get a piece of chocolate, which was exceptional at the time as chocolate was rationed.

In a report of April 1946 to sponsors, Goldberger wrote, “Striking is the friendliness and love towards each other – the children are not bitter, as one would expect, but care for and protect everybody and are most thankful for any love and attention are given to them.”

A month later she added, “The close contact between older and younger children gives them some feeling of family life and home which they have lost.”

In December 1948, the hostel moved to nearby Lingfield House, and Weir Courtney was sold in 1949. Lingfield continued to care for the children until 1957.

Early in 1946, older girls from a recently closed Manchester hostel came to Weir Courtney to help with the younger children.These girls needed more rehabilitation before starting work. They stayed with the children for around three years: