A keen embroider/creative sewer for many years and long-time volunteer for Jewish Care, I answered the call for helpers in 2014 to be involved in the creation of the Memory Quilt and took on the task of producing the map of Austria.

Through my research for its design I decided the main colours would be those of the pre 1938 Austrian flag, namely red, black, white, gold and tones of these which I used for the country’s outline and the names. Then to give it some “shape” I added the main rivers, alpine ranges, forested and some pasture areas together with a few towns. The background material was from an inherited damask table cloth with drawn thread work appropriate to the era.

Little did I know just how much time I would spend on this project and how rewarding it would be but the more I worked on it the more I realised that I had subconsciously been drawn to it from a personal perspective.

My friend Gillian Hamilton, who died some years ago, was the daughter of Beatrice and the late Leon Manders - one of “The Boys”. 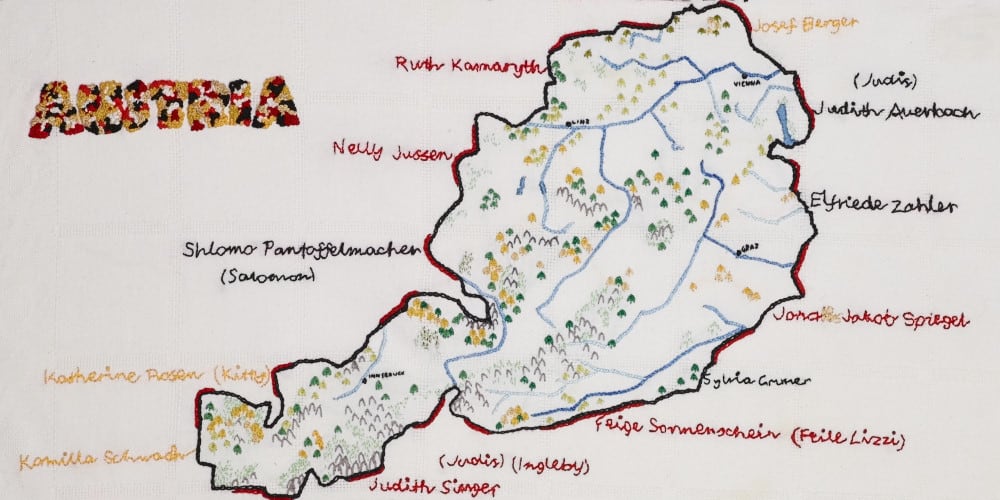 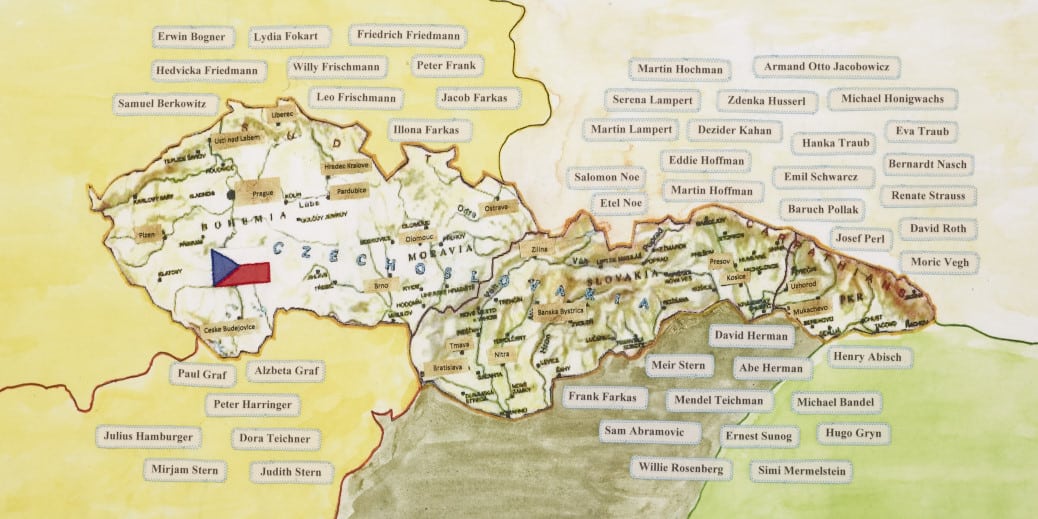 As an amateur embroiderer, living in a household full of maps and geographical material I approached the task of making maps for the Memory Quilt full of enthusiasm. It never faded and became more interesting as I discovered so many facts. In particular I was first drawn to making the map of Hungary because my mother lived and fled from Györ to England in 1939. Also the map of Germany had personal relevance as my father fled from Berlin to England in 1939. I also completed the maps of Czechoslovakia and Romania.
The greatest challenge of producing the maps was to ascertain the borders in 1937 and also whether to choose a political, physical or one using artistic license. It usually boiled down, after much research, to what map was accurate and available. In order to find accurate maps research was undertaken both on the internet and through the extensive library of The Royal Geographical Society, which I was fortunate to have access to. Countries’ borders, particularly in Europe have little respect for people and their differing cultures!

Sometimes towns can have three names in three languages, for example Beregszász in Hungarian; Berehove in Ukrainian and Berehovo in Czech. This same town can also be found in different countries at different times, e.g. Czechoslovakia from 1919 to 1938; Hungary from 1938 to 1944; Ukrainian Soviet Socialist Republic from 1945 to 1991 and Ukraine from 1991 to present.

Even within the same country, a town’s name can change over time and accurately determining the home town and country of individual survivors took a lot of detective work. For example, Uzhgorod/Uzhhorod in Ukrainian, Užhorod in Czech and Ungvár in Hungarian.

I used a range of techniques to achieve a natural earthy look to these historical maps. These were mainly using watercolours in shades to reflect the mood of the map and even included a tea-bag wash!

Then came the process of writing each person’s name, paying very careful attention to the spelling and spacing. Each name, a survivor with whom I felt a connection - what was their eventual journey? I would like to think that the very small part I have played has added to the honouring and respect of the 732 child survivors of the Holocaust. 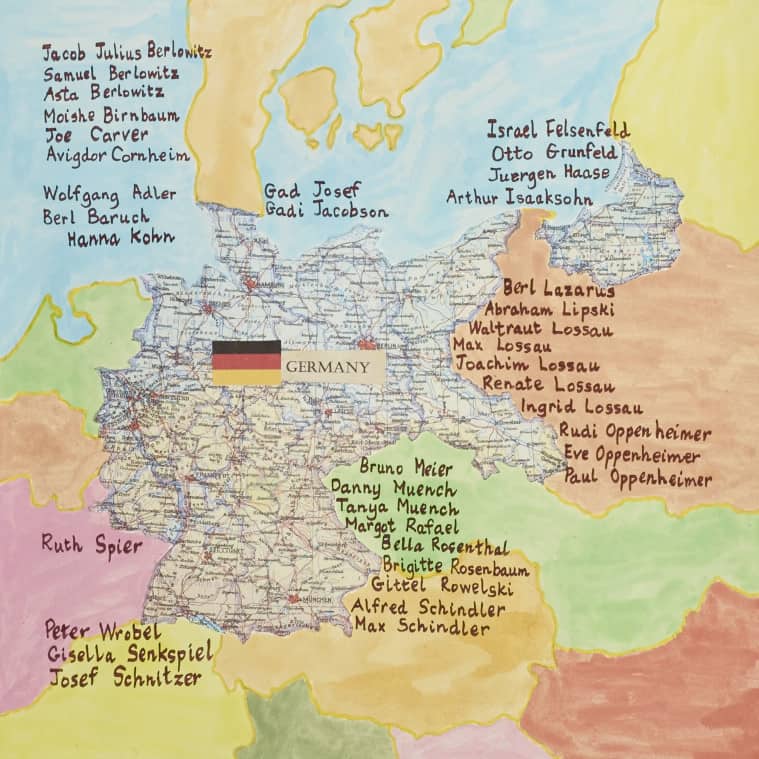 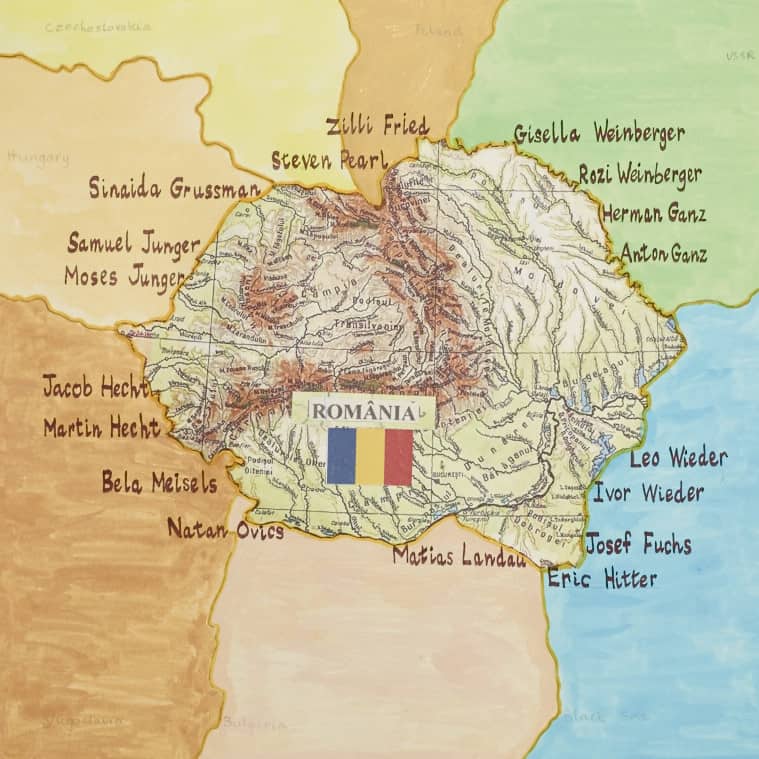 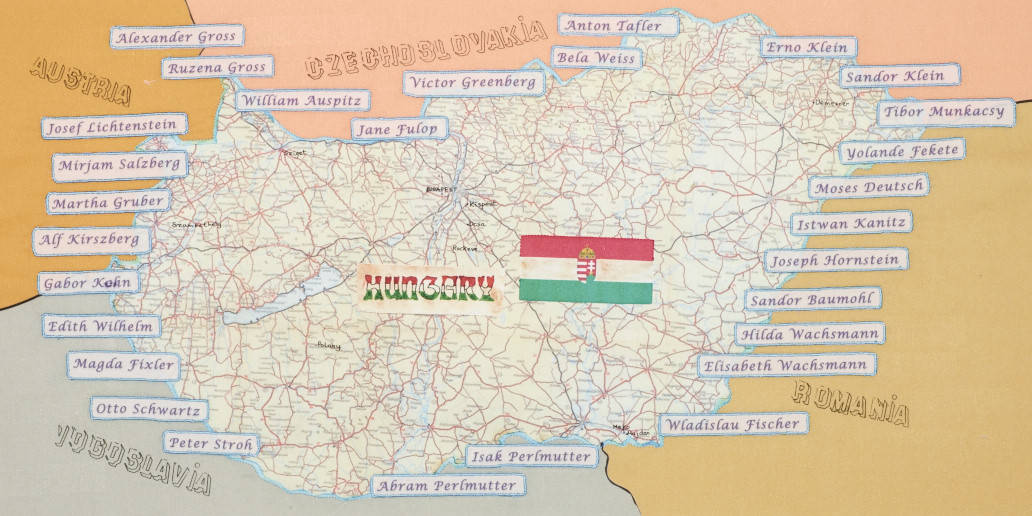 In 2006 I was commissioned by the London Assembly to inscribe The Book of Commitment for Holocaust Memorial Day so I equally thrilled to be invited to contribute to the “memory quilt” project. As a professional calligrapher with many years‘ experience of working on a range of commissions , I loved the idea of being able to use my skills to work on something so meaningful. Although I knew it would not be easy to successfully combine a pre-war map of Poland with 350 names to create a pleasing image, I had no idea quite how much of a challenge, nor how moving an experience it would be.

When I decided to create the shape of the country with the names, I had to plan it all meticulously to ensure every name was included. No easy task. Then came the actual writing using a broad-edged pen and 5 different paints in “earth” colours. I wanted to give each individual their due respect so changed the colour for each person as I wrote along the line. In consequence my progress was slow and on average only managed 15 names an hour! However it was well worth it to once again be able to play a small part in both commemorating and celebrating the lives of this group of holocaust survivors. 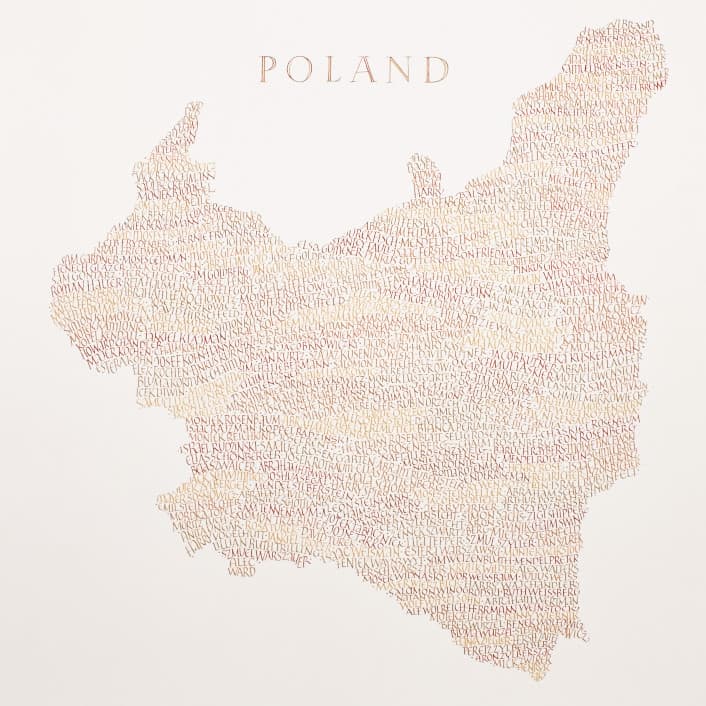