Bratislava, now the capital of Slovakia, was home to 12 of the Boys.

Jews first arrived in Bratislava in the 10th century but a community only began to develop in the 17th century. The city was known by it German name of Pressburg for much of its history.

In 1930, approximately 15,000 Jews lived in Bratislava, which had a total population of 120,000. On the eve of the Holocaust the Jewish community was the largest in Slovakia.

Jews were active in local politics and cultural life. The city was a Jewish religious and political center and home to the renowned Pressburg Yeshiva, as well as the Zionist Organization of Slovakia.

In March 1938, following the annexation of Austria to Germany, hundreds of Jewish refugees arrived in the city.

Antisemitism was an issue in the inter-war period, as after the city’s inclusion in Czechoslovakia, the local Slovak population identified the Jews with the city’s former German and Hungarian elites. There were serious anti-Jewish riots in 1938 and 1939. As a result many Jews left Bratislava, some settling abroad.

Imi Lichentefeld helped to defend the community by teaching martial arts. It was a movement that is today known as Krav Maga.

After the creation of the Slovak state in March 1939, a Nazi ally, persecution of the Jews began immediately. By March 1942, when the deportations began, nearly half of the city’s Jews had been evicted, and dispersed in smaller towns across the country.

German forces occupied Bratislava in September 1944 and approximately 2,000 of the remaining Jews were sent to the Auschwitz-Birkenau concentration and extermination camp in occupied Poland.

The vast majority of Bratislava’s Jews were murdered in the Holocaust.

Of the over 15,000 Jews living in Bratislava in 1940 about 3,500 survived. Jews returning to Bratislava from the war met with indifference and sometimes even hostility.

Immediately after the war, Bratislava became the centre of Slovak Jewry due to the fact that many Slovak Jewish survivors preferred to settle in the relative safety of Bratislava as opposed to their former hometowns in the country.

Restitution issues and high levels of antisemtism led most of those survivors to believe that there was no future for the Jewish community in Slovakia. There were anti-Jewish riots in 1946 and 1948.

Despite this, Bratislava was a major transit point in the Jewish exodus out of eastern Europe in the years after the Holocaust, as Jews headed for the American occupied zone of Austria.

From 1945 until February 1949, more than 150,000 Jewish migrants passed through Bratislava, most of them walking across the bridge at nearby Devinska Nova Ves. The refugees met with no sympathy from the citizens of Bratislava and its surroundings, who feared that the migrants might settle in the city.

In 1949, the communist regime came into power in Czechoslovakia. The bridge was destroyed and the river then formed part of the Iron Curtain that divided Europe in the Cold War.

A new bridge commemorates the end of communism but there is now mention of the site’s importance in Jewish history.

About 2,000 Jews remained in Bratislava in 1949, when the communist government took control of the country. Under communism Jewish religious and cultural life was gradually restricted and the property of Jewish organizations was nationalised.

The Jewish quarter in Podhradie, a historical part of Bratislava, was demolished in the 1960s. At the same time, however, restrictions on Jewish life were eased and some Jews allowed to leave for Israel. Many more Jews left the city after the fall of communism.

It is estimated that about 800 Jews now live in Bratislava.

The Museum of Jewish Culture was established in 1994 and there is a memorial to the Slovak Jews who perished in the Holocaust on the site of the former Neolog synagogue. A Holocaust Documentation Center is dedicated to research on Slovakian Jewry. 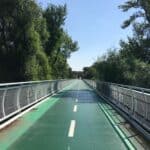 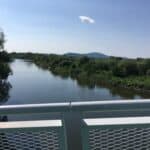