Over 150 people attended a moving Holocaust remembrance service in May 2016 organised by Frances Kahan and the Perl family.

Children from the community opened the service with the lighting of six candles, Joshua Cass recounted his life-changing trip to Poland with JNF and the audience was moved by Hebrew songs beautifully sung by Bension accompanied by Claudio on his accordion. 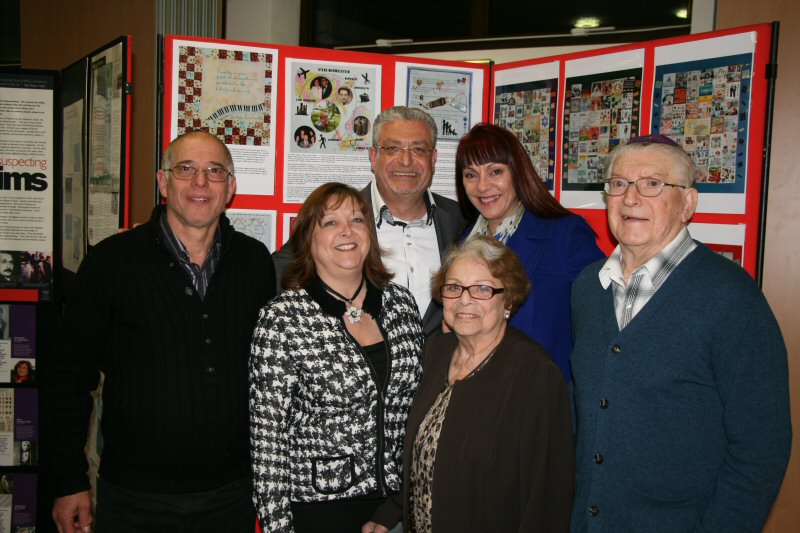 “Frances Kahan poses with her family including husband, parents, brother and sister in law. Her father Joe Perl is one of The Boys and has been a frequent speaker in schools”.

A keynote was graphically delivered by survivor Eva Behar. A tiny but hugely courageous 92 year-old survivor, she told of her descent into the clutches of the Nazis and of a journey which saw her rounded up and taken to Sighet Ghetto, transported by cattle wagon to Auschwitz in May 1944 and finally transported again by cattle wagon, followed by a four-day death march in the freezing depths of winter, into the horrors of Bergen-Belsen, where she arrived on January 1st 1945. Though suffering from typhus and dysentery and delirious from lack of food or water, she recounted the moment British forces liberated the camp on April 15th 1945 and went proudly on to tell of her life after her recuperation and of building a wonderful family. Eva’s triumph! When she finished, the silence was deafening!

The second keynote was eloquently delivered by Olivia Marks-Woldman, Chief Executive of the UK Holocaust Memorial Day Trust, who used a camp story of a postcard, a photograph and a bag of beans to remind us all of our individual responsibilities in keeping the memory of those butchered in the Holocaust alive, so they do not suffer a double death.

Local dignitaries including the Mayor of Hertsmere Cllr Martin Worster, Oliver Dowden MP for Hertsmere, The Vice Lord Lieutenant of Hertfordshire Richard Beazley and several local Councillors attended the service which was closed by Rabbi Salasnik who movingly told of his own family’s loss in the Shoah. It will be the last time his words close this remembrance service as he retires after serving the community for 37 years.

Growing in attendance every year, if you are in the Bushey area, this poignant Yom HaShoah service is a powerful way to keep the memory alive and to honour those whose lives were so cruelly lost.