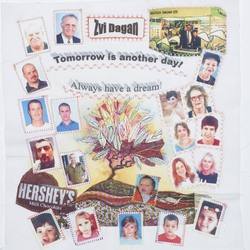 He left for Israel in September 1949 where he married Shoshana on 2nd June 1953. He is living in Ashkelon, has 2 daughters, 6 grandchildren and 6 great-grandchildren.He is a very optimistic person and always has lots of plans for the future and his cup is always half full! He is full of hope and surrounds himself with young people and says he always feels wonderful. He has two lines that he likes to repeat: ‘always have a dream’ and ‘tomorrow is another day.’