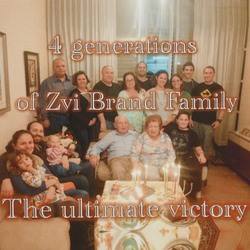 He was taken to Plaszow concentration camp in 1941/1942, Skarzysko-Kamienna in 1943, Częstochowa raków in 1944 and that same year to Buchenwald. In April 1945, he was one of those who survived the death march to Theresienstadt where he was liberated on 8th May 1945.

He was transferred from Prague to Windermere in England by Dr Graham in August 1945. The family photo of him with his wife, children, grandchildren and great-grandchildren represent the continuation and the ultimate victory over cruelty.