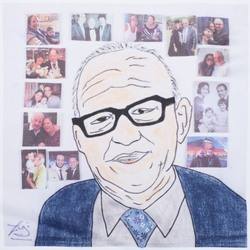 Zigi was born on 18th January 1930 in Lodz, Poland. When he was five years old his parents divorced but because they were Orthodox Jews and divorce was frowned upon, he was told that his mother had died. In 1939, when war broke out, Zigi’s father escaped to Russia, believing that it was only young men that were at risk. This was the last time Zigi saw his father. In 1940, Zigi and his grandparents were forced into the cramped conditions of Lodz ghetto, where his grandfather soon died. When the ghetto was liquidated in 1944 he was sent to Auschwitz-Birkenau with his grandmother. On arrival, he was sent to the showers where they were stripped, shaved and showered. A few weeks after arriving at Auschwitz-Birkenau, all of the surviving workers were sent to a concentration camp near Danzig. He was liberated in May 1945 by British troops. Three days after liberation, Zigi ended up in hospital for three months due to the effects of overeating after a long period of malnutrition. Once he left hospital, he and his friends were sent to a Displaced Persons’ Camp.
Zigi finally arrived in the UK in 1947, where he married and had a family; he is now a father, grandfather and a great grandfather. For a boy whose childhood and education were cut short at the age of 9, Zigi now works tirelessly to educate adults and children about the Holocaust. He travels up and down the UK sharing his testimony to schools and colleges on a weekly basis.The square was made in honour of Zigi, when we asked him what he would like to portray, he said ‘his family’. Family is everything for Zigi, as he lost most members of his family during the holocaust. We are all so fortunate to be able to call Zigi our grandfather/father, and we are so proud of all the hard work he puts into holocaust education.