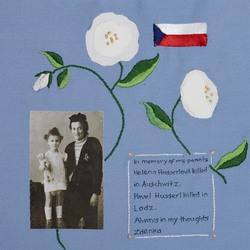 I, Zdenka Husserl (born Zdenka Husserlova), was born on 6th February 1939 in Prague, Czechoslovakia and my parents were Pavel and Helena (Fischerova) Husserlova. On October 10th 1941, when I was just 2 ½ years old, my father was deported to the Lodz ghetto, where he died a year later. Following his deportation, my mother brought me back to her hometown of Zdikov to live with her mother and uncle. We remained there for one year before being sent to Terezin in November 1942. My mother was subsequently deported to Auschwitz on October 19th 1944, where she died at the age of 34. I was just 3 years old. I remained in Terezin until liberation on 8th May 1945.

On 15th August 1945 I was one of the youngest children on a transport of 300 child survivors brought to England sponsored by the British philanthropist, Leonard Montefiore. I was 6½. I was looked after in Weir Courtney in Lingfield, Surrey for 3 years by a wonderful of team of women. My new life started when I moved to Isleworth at the age of 13.

I went back to Czechosolovakia in 1987 and I met up with 2 step aunts. At that time my biggest question was whether a photograph of my mother existed? It took two years for one of my aunts to search the village where I was born to see if anyone had a photograph. Sure enough, there was a girl, whose mother had recently died, who looked through her mother’s photograph collection and found this very photograph. Fortunately, my aunt Slavka recognised my mother in the photograph and realised what a treasure it was. She sent it to me on Christmas Eve 1989 in a Christmas card. When I opened it I was numb with shock, but couldn’t cry. I sat in a chair for a minute to take it all in. When the opportunity came up to make a square for the Memory Quilt – the first thing I thought of was this special photograph. This has been stitched with love into my square together with a white peace rose planted on my behalf at Beth Shalom.