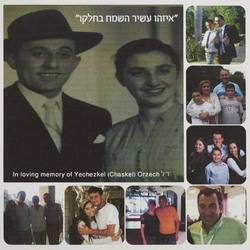 The story of the square is about two brothers, Reuven and Yechezkel Orzech, born in Kielce, Poland, to Reb Sholom and Gitel Orzech who had six children: Yossef, Hindi, Rochel, Reuven, Yechezkel and Simcha. Reb Sholom was a Sofer Stam. When the war broke out, Reuven was taken along with his cousin Moshe Preis to Auschwitz while Yechezkel was taken to Buchenwald. His journey through hell began in the Kielce Hasag factory in 1939. After a few months in 1940 he was transferred to the Czestochowa factory. In 1941 he was sent to Buchenwald, in 1942 to Rhemsdorf and in 1943 to Theresienstadt, where he was liberated in 1945 by the Russians.

His later years were spent in Israel together with his wife, children and grandchildren. Our late father lived by a virtue mentioned in Pirkei Avot (Chapters of the Fathers): “Who is rich? One who is satisfied with his portion.” He was a rich man. Yehi Zichro Baruch.The Yahrtzeit candle symbolises the Ner tamid for the rest of the family who perished in the Holocaust, as well as the six million Jews, may their memory be for a blessing and never forgotten. The fruit tree symbolises the fruitful life that Yechezkel and Reuven had through their children, grandchildren and great-grandchildren. Yechezkel married Helen and Reuven married Rita. The picture of the two brothers shows how happy they were to be together. They met each other in Prague in 1946. The picture of Yechezkel at the Kotel shows how grateful he was to Hashem for surviving the Holocaust and by saying Modeh Ani L’fonecho. The palm tree with the dates symbolises how righteous the two brothers were.

Rivka Orzach: The project was very significant for me as I am one of the older grandchildren and therefore spent more time with my late Zaida. It meant a lot to me on 2 levels; firstly, it was an opportunity to do something constructive to commemorate my late Zaida, and on another level to be able to give “nachas” to my boba and to show her that his memory is still very much alive and will continue to be passed on to the next generations בע”ה .