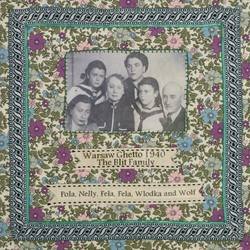 Our mother Wlodka Blit Robertson was in the Warsaw ghetto until 1943, just before the ghetto uprising, living with her twin sister, grandparents, aunts and uncles, and cousins.

homelessness, people dying from hunger in the streets. Her mother Fela ran a soup kitchen for starving children as part of secret self-help committees. Her uncles and grandfather built bunkers for the family to hide in.

Michal Klepfisz, who was a Bundist courier on the Aryan side, found a Polish Catholic family who for payment agreed to shelter my mother and her sister Nelly in their home. At night they were smuggled out of the ghetto, climbing a ladder over the ghetto wall. My mother was then moved on to another family because the first family felt it was too dangerous to hide two Jewish girls.Her mother was caught by the Germans escaping through the sewers to find her daughters and was murdered in the concentration camp at Majdanek.

Our mother was reunited with her sister, and later – miraculously – with her two young cousins at the end of the war. She did not know that they had escaped from the ghetto through the sewers just a few days before the liquidation of the ghetto. In 1946, aged 14, she and her sister came to London to join their father who had spent time in Russian camps and then joined the Polish army until the end of the war. All the rest of her family had been killed.