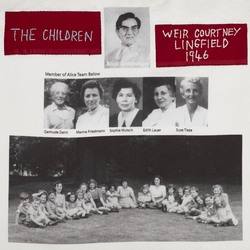 I chose to make this square for everyone at Weir Courtney, Lingfield, Surrey, as a token of my gratitude for all their loving care and support they gave all the youngest children who were brought over with The Boys.

Weir Courtney was one of many hostels which were opened to receive the youngest camp survivors. The emphasis at first, not surprisingly, was on food and medicine. Meals were large and very regular. The emotional needs of the children were harder to satisfy. The Matron of Weir Courtney, Miss Alice Goldberger, and her staff devotedly cared for the children from the day they arrived in 1945 until their departure for a new home in London in December 1948.The six women in this square were so special because they became our surrogate mothers. In particular, Alice Goldberger was a truly unique individual who dedicated herself to the wellbeing of all us children from the concentration camps. Alice herself had fled Germany when Hitler came to power and had studied under Anna Freud. She was devoted to all the children under her care at Weir Courtney. When the children arrived, they were full of hostility, fear and distrust. They were all wild: they were scared of dogs, particularly the Alsatian dogs, they had to be taught how to eat and to understand that their food would not be taken from them.

Despite the circumstances of getting there, for many these were the happiest years – certainly for me this is true.