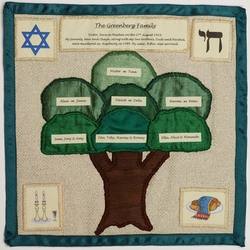 This square has been put together by Victor Greenberg and his family. It represents the family that he, together with his wife Tina, were able to create after he survived the Holocaust. The richness of the tapestry reflects the happy and full lives that the family have enjoyed together.

Victor was born on 27 August 1929 in a village called Majdan, which at the time was part of Czechoslovakia. He was taken to Auschwitz in May of 1944 with his mother, father, sister and two younger brothers. He was subsequently moved to camps at Mauthausen, Gusen and lastly Gunskirchen, where he was liberated in May 1945 by the US army. Only he and his sister survived from his immediate family.

After the war he was brought to the UK where, after serving in the Israeli army during the war of Independence, he finally settled. He married Tina in 1962 and they are the proud parents of three children and grandparents of nine grandchildren.

The four corners of the quilt are marked by symbols that reflect the most important features of Victor’s life, namely, life, Jewish Customs and Israel.