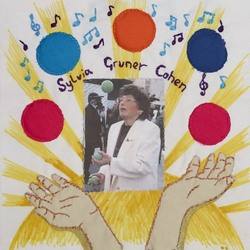 Mum was born in Vienna. She used to juggle as a child. I am not sure at what age but I assume it was after she arrived in the UK. One day she started playing with some tennis balls and it went from there. She always said she juggled because she liked the attention she got when she did it. She used to travel to music events around London or wherever there was a large crowd of people, and then she would find a ‘spot’ to stop and just start juggling while the music was playing. She used to tell us stories of how people would come up to her and take photos or videos. If they offered her money, she always refused it. I remember she said that once a policeman came over and wanted to have a go so she let him but he wasn’t very good. I think she found it enjoyable and fun and it also was great exercise.

She liked visiting stately homes and watching celebrity chat shows on TV. She liked to have an insight into the lifestyle of the rich and famous. She asked a lot of questions about people and liked to hear that people were doing well at school or work and especially if they passed important exams. She was very proud when my brother got his accountancy qualification because it meant he had “letters after his name”. The family threw a party for him on a boat that went along the Thames in Windsor and invited friends along. She liked to know her children and grandchildren were doing well. I think she saw it as an extension of her achievements.

She never talked about her experience in the camp but was still in touch with the people that brought her to the UK and those that survived with her. We used to meet up with some of them including those that went to live in Israel and Australia. Alice Goldberger was the person that first brought mum over along with the other children. Many of the children went on to live happy lives and got married and had children of their own. Mum considered them to be her family. My sister and I were bridesmaids for one of the other girls and she used to babysit for us when we were much younger.