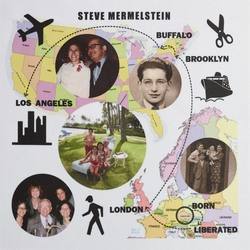 Our father, Steven “Simi” Mermelstein z”l was born on December 9, 1929 in Zdenyov, Czechoslovakia. The situation in his area began to deteriorate in 1943 and his older sisters convinced their father to let them care for him in Budapest where they worked as nurses in the Jewish Red Cross hospital. He was briefly conscripted into a labor camp but was rescued by his sisters and spent the remaining time in hiding in hospital, pretending to have a kidney disease.

After liberation in Budapest on January 10, 1945, Steve discovered his father Itzchak Eizig, sister Hudje and 3 year old niece Reizl were all murdered in Auschwitz. As a teenager, all alone, he was lucky to be included in the group of children brought to England by the Central British Fund in March, 1946. During the interviews, which were in English, a language he did not yet speak, the interviewer told him “All right”. He had no idea what that meant, but he often said that it was the happiest day of his life.

After almost five years in England, Steve emigrated to the U.S. and joined two of his brothers, Bennet and Kalvin, in New York. He went to Fashion Institute of Design, became a pattern maker and moved to Buffalo, New York where he met and married Ella Korman. Steve joined his brothers in 1961 in Los Angeles where they began manufacturing women’s clothing. They expanded their business into real estate development and property management and the business continues today. Steve and Ella had four daughters: Sandy, Elaine, Suzanne and Elisa. Sadly, in May 1975, Steve lost his beloved wife to cancer when she was only 34 years old and was left to raise his daughters as a single father.

The square represents Steve’s life journey and is centred on a map of the world. He was born in Zdenyov – represented by a picture of him with two of his sisters and his niece. He was liberated in Budapest and then moved to London. His move to the United States on the Queen Elizabeth II is represented by the picture of him as a young man next to the image of the boat. The scissors represent his training in London to be a pattern maker. After moving to the U.S., he moved to Buffalo where he met and married Ella Korman. The two of them are shown together. The image of the airplane represents his love of travel. The final two pictures are with his four daughters and his three grandchildren, Aaron, Ella and Noa – his great pride and joy!