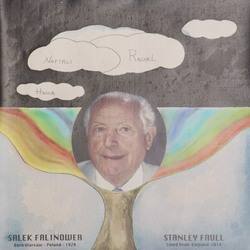 Stanley (Salek Falinower) was born in Warsaw, Poland on 29th October 1929, to a loving, middle class family who owned a metal foundry. He was not quite ten when war broke out and the family were crowded into the Warsaw ghetto, living in squalid conditions until the Warsaw uprising in 1943. His sister Henia left to join the Resistance and was never heard from again. His father Naftali was killed in a bunker in the ghetto. After the uprising was brutally suppressed, he and his mother Rachel were taken to Majdanek concentration camp, where his mother was murdered in the gas chambers and he worked as a slave labourer.

The top part of the panel is evocative of the Holocaust. The dark and foreboding sky epitomises the dreadful times of his early life, first in the Warsaw ghetto and then in various concentration camps, before his liberation from Theresienstadt on May 5th 1945. The clouds represent his parents and sister who were murdered in the Holocaust. The spare cloud symbolically represents the 6 million, including 1.5 million children, who also perished in the Holocaust.

The bottom half of the panel shows the other half of Stanley’s life. Like him, it is colourful and full of joy, with the rainbow colouring showing renewal, hope and in Noah’s time, a sign of God’s covenant to never destroy all life on earth.

The tree is a sign of Stanley starting his own family with three sons and four grandchildren, all of whom he was immensely proud. The Faull name, which he and his brother Gerald started, lives on as a permanent reminder of “Triumph over Adversity.” Stanley died in Hove, England on 11th May 2014.