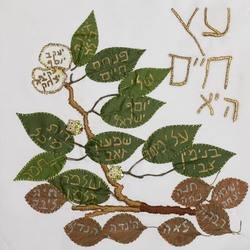 Our father, Solly Irving lost his parents Yisroel Yitzchak and Chana Necha and four sisters Rivka, Leah, Hindel and Hendel and was the sole survivor of his large family. We have remembered those murdered, and shown by the tree of life that this family, and indeed the Jewish people will live on. The leaves show how although they tried, the tree was not killed off and continues to grow; from my father, his two children and son-in-law, four grandsons, two grand-daughters-in-law and now the blossoms continue with two beautiful great-grandsons. We also wished to portray our families continued love & commitment to Judaism via the use of our Hebrew names. Born in Ryki, Poland, on 11 August 1930, Dad is now 84 and over the past 20 years has devoted much of his time speaking about his experiences to school children, university students and adults throughout the UK. He has particularly adopted Plymouth (and they have adopted him) and it is estimated that he has spoken to over 20,000 pupils there over the years, telling his story and preaching the importance of tolerance in the community. This is at a time when his health has not been the best but it drives him and gives him purpose. This is an important lesson for young non Jewish children in a non Jewish area, who are able to listen to an elderly religious Jewish man talking about his story and the importance of tolerance at such a challenging time for the world.

He came back from one trip to Plymouth at the end of January 2015 and said that the highlight was a young man seeking him out who had heard him speak some years earlier and, on the back of his message, had decided to become a teacher and influence youngsters in a positive way.