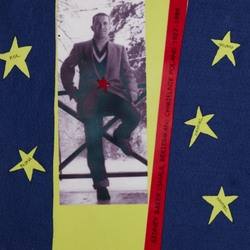 Sidney Baker was born Shaul Bekierman on 20th October 1927 in Chmielnik, Poland. The son of

Yekesil, a mill owner, and Bluma Morowicz, Sidney had three siblings Shlomo, Haskiel and Shmuel. The family was religious, although Sidney did not like going to cheder, instead preferring to run away to work at his father’s mill.

After going through a number of camps, Sidney came to England with The Boys and then settled in Winnipeg, Canada. He married Adele Garfinkel and had three children, Barbara, Jeff and Roseanne, and six grandchildren, Elan, Noam, Tal, Adina, Tamar and Jenna. He enjoyed his work as an importer and loved life, especially being with family and friends. He lived life to the fullest!The photo on the square shows him as a young man, surrounded by stars containing the names of family members he lost.