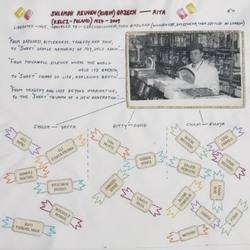 Our father Shlomoh Reuven (Rubin) Orzech was born in 1924 in Kelcz, Poland. He was taken to Bergen Belsen and then spent some time in a slave labour factory. Eventually he was sent to Auschwitz concentration camp, where he was tattooed with a number on his arm. He was finally liberated in 1945.

Travelling through Czechoslovakia, he was brought over to England that same year. He was placed with other survivors in Windermere (Lake District), then followed on to Gateshead where he studied in Yeshivah there. He started off a new life in London doing an apprenticeship in diamond polishing.

The square represents his children, grandchildren & great grandchildren, being the “sweets” and “joy” of his life. We have chosen this theme because after our father lost his job he owned a sweet shop in Hackney from 1957 for approximately 20 years. The information is limited because he found it extremely difficult to talk about his past, as did many of the survivors.