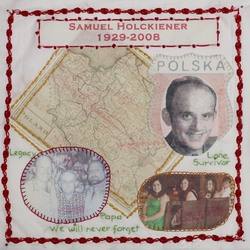 Samuel Hilton (Holckiener) was born September 23 1929 in Warsaw, Poland, so the square has a background map of Poland. He came from a large family and they had a Tannery Business. When he was about 11 years old, the war broke out. His mother and sister were taken to the gas chambers. Sam and his father fought in the Warsaw ghetto uprising. Then they were caught and sent to camps and his father Joseph died in Sam’s arms from shrapnel wounds. Sam was in several camps and was liberated in Theresienstadt. From there the children were sent to England for rehabilitation. Sam was at Windermere in the Lake District. He stayed in England for about 2 years. Then he went to the US to stay with an aunt and uncle in Los Angeles for a short time. He joined the Air Force where he served for 8 years. After that he went to college, got a Master’s degree and became a CPA.We married in 1957 and had two sons followed by four grandchildren. His family was always Number One to him. The lower photo shows Sam with his 2 sons, Steven and David. I think it was taken on his 75th birthday. The other photos are our grandchildren, Shari, Eva, Harrison and Natalie.

He loved to read World History books. He spoke to the schools in our area about his experiences. He did not have any hobbies but loved to talk and tell jokes. He also enjoyed travelling. We celebrated our 50th Anniversary together on 22nd December 2007. Sam passed away in 2008 from pancreatic cancer, he was only ill for 6 weeks.