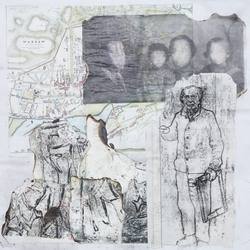 My father Samuel Dresner was probably born on January 2nd 1928. As all of his papers were destroyed, his birth date is one that he thinks is accurate, but he is not 100% sure of either the day or even the year.

He was born in Warsaw, Poland. During the war he lived in the Warsaw ghetto and was then taken to various camps, including Buchenwald and Theresienstadt – from which he was liberated by the Russians in 1945.

He arrived in England in August 1945, and initially stayed in a sanatorium in Windermere. It was in Windermere that he painted his first picture, which won him a prize and sparked his interest in art. He went on to study art at the Byam Shaw School in London and at the Andre Lhote academy in Paris. Today he lives in North London and is still working as an artist.

The square that I have made includes some of his etchings, which I have collaged and burnt – this is a reference to some of my father’s artwork.I have also included a photograph – with the faces erased, this is because one of the things that upsets my father is that he has no photographs of his family – all of whom were murdered in the Holocaust. There is a map of Warsaw, representing his home town and in the bottom right corner, I have made a monoprint portrait of my father, emerging out of a doorway and holding an empty frame.