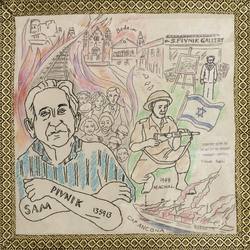 Sam was born on 1st September 1926 in south west Poland in Bedzin, near the German border. In 1943 his family was sent to Auschwitz/ Birkenau. His father, mother, 2 sisters and 3 younger brothers were murdered. An older brother and Sam were the only survivors. He was sent to work on Auschwitz’s Rampkommando where prisoners were either selected for work or gassing. He then worked at Furstengrube mining camp. As the Third Reich collapsed, he was sent on the Death March that took them west, and was liberated in Neustadt in 1945.

Sam was one of a handful of people who swam to safety when the RAF sank the ship Cap Ancona carrying survivors after the war – mistakenly believing it to be carrying fleeing member of the SS.

Smuggled in to Palestine, Sam fought in the War of Independence in 1948 and was very proud to receive a certificate from Yitzak Rabin for his service.

Sam settled in London with his brother and bought a house which he shared with his brother and his wife. He built a life as an Art Dealer and ran a gallery in Notting Hill. Sam shares memories of his experiences through lectures and talks and wrote his memoir ‘Survivor’ as a record of his life and the Holocaust.