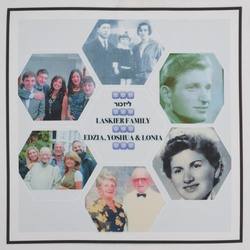 My father, known then as Szmulek or Shmuel Laskier, was born in Warsaw in August 1927. His family home was in the middle of the ghetto on Stavki St, across from the Umschlagplatz. After approximately 18 months in the Warsaw ghetto, his parents managed to smuggle him out and he was sent to stay with his Aunt in Ostrowiecz. From there, he was sent to Blizin concentration camp, and from there, to Auschwitz/ Birkenau. After 7 months, he was then transported to Buchenwald concentration camp. After many months, he was sent with many of The Boys to Theresienstadt. There, he was liberated on 8th May 1945 by the Russians. Dad was then helped by the Central British Fund to come to England in August 1945 and was sent with the first group to Windermere in Cumbria.

My father’s younger sister Rushka also survived the camps, and they were reunited in the UK in 1946. Eventually his sister emigrated to Israel where she still lives, together with her husband, 2 children and 3 grandchildren.Dad eventually settled in North Manchester where he met our mother, Blanche. They married in 1956. Initially dad worked in many factories and industries and eventually built a business in wholesale menswear.

This square represents the Laskier family, from before the Second World War to the present day where my father is surrounded by the love of his 4 children and 5 grandchildren, and is in memory of his mother, father and sister (top picture) together with many of his extensive family who perished at the hands of the Nazis.