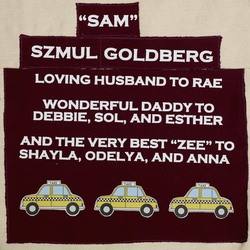 Sam (Szmul) Goldberg was born in Bendzin, Poland, on December 25th 1929 to Zvi and Ita Goldberg. He was brought up as a Ge’er Husid, and remained in the Bendzin ghetto until August 1943. He was then sent to 6 work camps and ended up in Thereisenstadt, where he was liberated by the Russians in May 1945.

In August 1945 he was sent to England, and from there to Glasgow, Scotland. In January 1948 he emigrated to Canada, and is still living in Toronto, where he is involved in the transportation business. He owns taxi cabs and has founded his own company.

Sam and Rae have been married since 1968, and have 3 children, Debbie, Sol and Esther, and 3 beautiful grand-daughters: Shayla, Odelya and Anna.