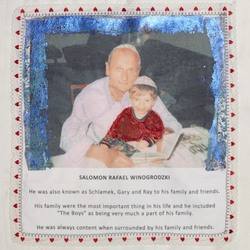 Salomon Rafael Winogrodzki was known as Schlamek, Gary and Ray to friends and family, but I knew him as ‘Zidda’. I have countless cherished memories; I remember Zidda saying ‘Hello Moto’ as a greeting whenever he would see me. The Motorola mobile phone advert played repeatedly when we had been watching television.

Once when I was staying over at Booba and Zidda’s, Booba was a bit under the weather and not up to making spaghetti Bolognese (something that was religiously made every time I visited). Zidda, who did not have a great deal of experience in the kitchen, agreed to cook under Booba’s supervision. Booba sat on a chair in the corner giving strict instructions, telling him to add another ‘splash’ of Worcester sauce. The dinner turned out just as it always did. I could smell the rich tangy Bolognese as it was placed on the table. The recipe is one I still use to this day; the smell of the sauce is as distinctive as ever. Food in Booba and Zidda’s home was never at a shortage. Lunchtimes would consist of Zidda making smoked salmon and cholla sandwiches cut into little rectangular pieces. I remember Zidda sitting beside me at the dinner table playfully chanting ‘why are we waiting?’

I vividly remember the countless times that Zidda and I played board games, such as draughts. He would ask if I wanted to play the ‘Polish version’ which allowed certain pieces to move in different directions; we played it this way every time. I also distinctly recall the times that Zidda would pick me up from school. He always waited in the playground and greeted me with a big smile.

While staying over at Booba and Zidda’s, I was always tucked into bed by Zidda who would say ‘goodnight’ and then walk out of my room into the hallway. A few seconds later, through the gap between the door and frame, Zidda would appear and peep through smiling at me. I would always smile back.