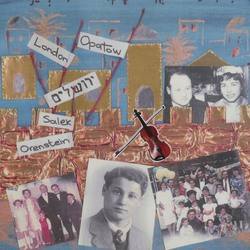 Salek (known at home as Yisocher Mendel) was one of four children born to Herschel and Nacha Ella in Opatow, Poland. His parents and little sister Shifra Leah were murdered in the Treblinka extermination camp; his brother, Yehuda Fischel, died in Schlieben. Only Salek, and one sister, Pola, survived the Holocaust.In 1940, Salek was separated from his family by German Nazis. Only a young boy, he was selected for slave labour in Skarżysko-Kamienna. This marked the beginning of years of torture and deprivation. On starvation rations, Salek became increasingly weak; but he survived typhus and concentration camps and was liberated near Theresienstadt in May, 1945.

Despite making heroic efforts to reach Palestine, he arrived in Windermere, only 17 years old. Salek was one of “The Boys” whose story is told by Sir Martin Gilbert. In London, Salek met his future wife, Jenny Merel. Marrying Jenny and the arrival of their four children gave Salek a new lease of life and the hope of a future. In common with many survivors, Salek’s dream was to be “a part of the recreation of the Jewish nation” (quote). In 1982, he and Jenny fulfilled that dream and bought a home in Jerusalem.

On Salek’s square, his journey is represented by flags set on a background of the walls of his beloved city Jerusalem. He was a skilled klezmer violinist and the violin depicts his love of Jewish music. The photos are of himself, Jenny, his children and his grandchildren. Salek lived to hold his first great grandchild during the ceremony of his circumcision. He passed away shortly after. To date, there are four boys named Yisocher Mendel, after him. All of “our boys” have Salek’s indomitable courageous fighting spirit and quick sense of humour!