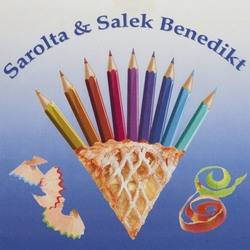 pencils or adjacent to them if the fan does not cover the whole square. Alternatively the cake could be overlaid on a sheet of Letraset or other type fonts.

My mother is called Sarolta, which is the Hungarian version of Charlotte. She was born in Györ, Hungary, on 18th August 1926. She came to England in 1945 after being liberated from a concentration camp. My father was Salek Benedikt, born in Lodz, Poland, on 17th October 1922. He died on 16th December 2013 from pneumonia following major surgery for stomach cancer. He too came to England in 1945 following liberation from a concentration camp.

My father was a graphic artist who worked in advertising. My mother was a housewife who enjoyed baking. She was especially known for her apple pies and pavlovas.