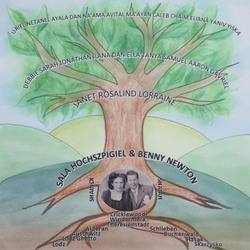 My parents were born in Poland in 1929, my mother Sala in Lodz and my father Benny in Skarzysko. Their war years were spent in various ghettos and camps, both finally ending up in Theresienstadt from where they were liberated on 6th May 1945. They were brought to Windermere where their relationship blossomed and they eventually married on 6th May 1951, settling in Cricklewood, in north west London.They were affectionately known as Shaindl and Shaiah by their friends. The essence of their survival is their family, having been blessed with 3 daughters, 9 grandchildren and 12 great-grandchildren.