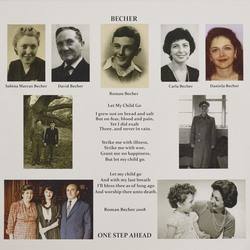 Roman was born in Lwow, Eastern Poland on 23 November 1929. Only his mother Sabina, aunts Lucy and Anka and uncle Kuba Becher survived. They left for the US when the war was over. None of them had any children. Roman’s maternal grandparents Jacoub and Regina Marcus died in Russia of malnutrition. His paternal grandparents were shot by the Nazis in the basement of their house.

The rest of the family were shot in Lwow en masse by a Nazi firing squad which aunt Lucy witnessed and said that they had all died with great dignity, resigned and proud.

At the outbreak of World War 2, David was mobilised in the rank of major, in charge of the eye department of a military hospital. He eventually ended up in England via Romania and France. He spent the rest of the war not knowing what had happened to Sabina or Roman.

Roman and Ina survived the Holocaust miraculously owing to luck, resilience, the kindness of the Polish people and command of perfect Polish. Both were issued with false papers by the Polish Resistance, who helped them escape from Podhajce to Warsaw by train.

Roman and Ina successfully pretended to be “Aryans” in Warsaw from 1942 to 1945.

David arranged for Roman to travel to England in 1946 and then they moved to Scotland. Roman won a scholarship to the Edinburgh Academy and David was given a post at the Edinburgh Infirmary as an Eye Specialist. Sabina arrived in 1948 having remained behind in Poland to help look after survivors.

Roman thrived in Scotland with his family and eventually moved to England where he married Carla and had one daughter Daniela. I am the only remaining survivor of my family and this square is a photographic testimonial to my much loved family.

My father wrote the poem when I survived a life threatening illness. He made a pact with God that he would gladly die for me to live a healthy life. When I read the poem I think of the parents who lost their children in the camps. I watched my father’s dignified despair and am haunted by the deep despair that parents experienced knowing that their children had been murdered.