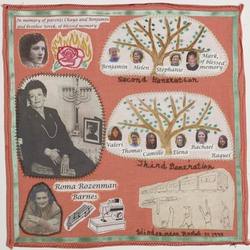 My mother, Roma Barnes (maiden name Rozenman), was born March 15, 1930 in Demblin, Poland. This square includes a recent photo of her and a photo of her when she was in the Windermere hostel in 1945. The photo above Roma is of her mother. Roma’s parents Chaya and Benjamin and brother Sevek perished at the Sobibor death camp. Roma was liberated in a labour camp in Czestochowa, Poland in January 1945.While living in England as part of the program run by the Jewish Joint Distribution Committee (aka “The Boys”), Roma met and married Burton Barnes, who was serving in the U.S. Army. They divorced many years later. They had four children who all grew up in the U.S. The youngest Mark, of blessed memory, had Down’s Syndrome and died in 2011. The quilt includes photos of her beloved children and six grandchildren on the Trees of Life. The menorah represents her roots as well as her Jewish community and synagogue which have given her strength and a connection to her parents and her heritage. The photo on the table is of Roma’s brave aunt Eva, Chaya’s younger sister, who rescued the menorah and gave it to Roma after the war. Roma is forever grateful to have been a UK citizen after being stateless, and today she is very proud to be a U.S. citizen.

Roma was a talented seamstress and gardener. She loved reading, traveling and listening to music. In her younger days she enjoyed bridge. The drawing of the flaming rose represents the loss of Roma’s family’s beauty. It is also a play on words since Roma’s maiden name was Rozenman. Also included is a drawing I found in the Windermere hostel autograph booklet by one of “The Boys.” I liked its whimsical feeling. I tried to include in the quilt what is most representative about Roma’s life. Her family means everything to her. She enjoys many special memories of England and being part of The Boys. Her Windermere and Manchester hostel friends and teachers gave her unconditional love so she could get a new start on life. Her preschool training classes through the hostel programs gave her the experience to lovingly take care of and raise her own children as well as to become a cherished caregiver for children when she was older.