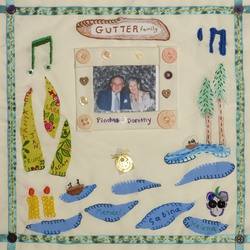 Pinchas Gutter was born in the early 1930’s in Lodz, Poland. The family then moved to Warsaw where they ended up in the ghetto. After the ghetto uprising, the family were transported to Majdanek concentration camp. Pinchas spent the rest of the war in several different work and concentration camps, until he was liberated by the Russians. He was then brought from Theresienstadt to Windermere in England as one of ‘The Boys’. After further travels he settled in South Africa where he worked in finance and raised his family, eventually retiring to Canada.

The square for Pinchas refers important themes in his life. These include the importance of family, memories of life before the war, his love of music, his ongoing commitment to Israel, Jewish life and Holocaust education. Pinchas is a much loved husband, father and grandfather, who is generous to friends, family and community, and an inspiration to many who have encountered him over the years.