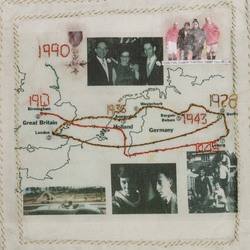 Paul Oppenheimer was born in Berlin in 1928 into a family of assimilated German Jews. His father worked for the banking firm of Mendelssohn & Co. The family moved to the Netherlands in 1936 which was then overtaken by the German occupation in 1940. Paul came to Britain in 1947 after nearly two years of incarceration, first in Westerbork, then in Bergen Belsen where his parents died. He moved to Birmingham where he combined an engineering apprenticeship with evening study towards a BSc in Mechanical Engineering completed in 1954 with 1st Class Honours. He took an MSc in thermodynamics and in 1958, joined Joseph Lucas as a nuclear project engineer and then moved to Girling where he stayed for 30 years.

He wrote many technical papers besides the Lucas Girling Book, a standard reference work for the industry and received prizes and awards. In 1990 he was appointed MBE for Services to Industry.

After a visit in 1990 to Bergen Belsen with his brother Rudi and daughter Judith, he devoted himself to speaking about his experience and the lessons of the Holocaust. He strongly believed that young people should hear the story, so that that dark history should not be repeated. Paul said:

‘We live in better times, however, we feel the necessity to reflect on the past, not for old times’ sake, nor for the exorcising of memories perhaps left alone, BUT BECAUSE WE CARE ABOUT THE FUTURE.