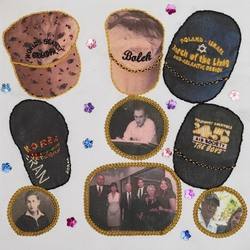 Paul Gast (Gastfreund) was born on November 16th 1929 in Lodz, Poland. He was ten years old when his family was forced to move to the Lodz ghetto. In August of 1944 he was transported to Auschwitz with his mother and uncle. As the war intensified he was moved to several different concentration camps until he was finally liberated by the United States 82nd Airborne Division while at the Wobbelin concentration camp.

After trying to return to his homeland, Paul went to Theresienstadt where he was one of the last two children taken under the British auspices to England and became one of the three hundred plus children who were to become “The Boys”. This square represents the different “Hats” that Paul has worn in his life after his liberation from the camps. Paul continued his life in the United States as a veteran of the Korean War, an accountant, and a spokesperson on the atrocities committed by the Nazis during World War ll. Most importantly, he became a beloved husband, father and grandfather to his family.