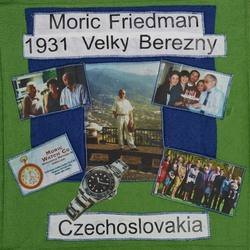 My father Moric Friedman was born in Velkey Berezeni on 25th April 1931, which at the time was Czechoslovakia. He was the youngest of four children. He lived in the town of Ljuta where the family was involved in the timber business.In 1939, Hungary occupied his part of the country. They had to leave with only what they could carry and were taken to Poland. They went into hiding. In 1944 they were taken to the ghetto with a few personal possessions. In May 1944 they were taken to the railway station and put into cattle wagons. He was sent to Auschwitz, Dachau and Buchenwald. He was liberated in April 1945. Only my father and his sister Shari survived from their whole family.

He went back to Czechoslovakia, but there was nothing there for him so he came to England on June 11th 1946. He built a new life for himself as a watchmaker. He had three wives and four children. He has lived a good, long and fulfilling life. He never dwelled on his horrific start and has never judged anyone ever!