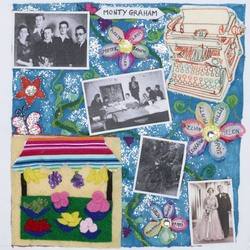 On 6th September 1942, just seven days before his Bar mitzvah, Motek, Zelek and their father were rounded up and sent to the nearby Modrzejow ghetto.

Following transportation from the ghetto to Auschwitz in 1943, Motek was never to see any of his family again. In January 1945, Motek was part of the ‘death marches’ in retreat from the advancing Russian army. Motek only survived when soldiers, arriving at Theresienstadt in May, heard him whimper as he lay half-unconscious among the dead bodies.

Following recovery from typhus in hospital, Motek finally headed to England by military plane where he began to learn English at the Windermere hostel (picture 2) and later how to ride a motorbike at Bedford! (picture 3)

Over the next seven years, Motek became Monty and met and married Millie in London 1952 (picture 4). Together, they started a new life in typewriter repairs and greengrocery. Helping to raise four children, Monty lived to also see the birth of four grandchildren “…and getting one back against Hitler”, as he was often heard to say.