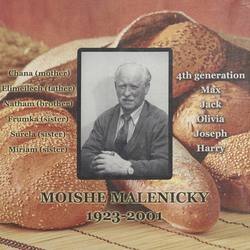 Moishe Malenicky was born in Piotrokow in Poland. His family were bakers and he lived with his mother Chana and father Elimelech, together with his younger brother and three little sisters.

He was just 15 years old when the Germans invaded his town and took the family away; he was the only one who survived.

Dad could never talk about his siblings and, although he passed away in 2001, it wasn’t until 2004, when the family visited Yad Vashem in Israel, that we discovered by chance, testimony to his brother and sisters that he had added in 1992 to the Central Database of Shoah victims.That was when we learned that their names were Nathan, Frumka, Surela and Miriam and we hope that dad will be pleased that we can now tell the fourth generation, his great grandchildren, all about his beautiful family.