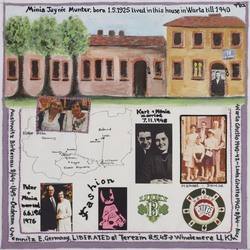 My mother Minia Jay was born on 1.5.1925 in Warta, Poland. In 1940 she was taken to the Warta ghetto and made to carry out slave labour helping to make Nazi uniforms. In 1942 she was taken to the Lodz ghetto. In 1944 she was taken to Auschwitz Birkenau then to Oederan Chemnitz in East Germany and finally Theresienstadt where she was extremely ill with TB in Hospital. She was liberated at Terezin 8 May 1945.

She was brought to England in August 1945 and stayed in Windermere before going to a sanatorium in Ashford Kent. She went to London after meeting Sam Heinrich from her home town of Warta who had come searching for a survivor of her family. He and his wife taught her corsetry and she was able to earn some money making and altering ladies undergarments. She met her husband to be, Kurt Wassing, married and brought up her two children Denise and Michael. She later married Peter Jay. Her sister Hela was her sole surviving sibling and close family member.

The square represents Minia’s actual house in Warta, her close immediate family: sister, husbands and children as well as some of her interests: fashion, bridge, lucky number 13 played occasionally and successfully at the casino and favourite colour amethyst.