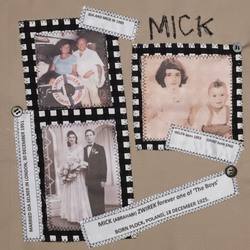 Our father Abraham ‘Mick’ Zwirek was born on 18 December 1925 in Plock, Poland. He was in two ghettos and four concentration camps. At first he was in a ghetto in his hometown of Plock and then briefly at Laziyo village before being moved with his parents and sister to Suchedniów ghetto. In September 1942 he was taken as a slave labourer to Skarzysko railway line and then onto the concentration camp nearby at Skarzysko. In July 1944 he was sent to Buchenwald concentration camp, then to Schlieben concentration camp and finally to Theresienstadt. He was liberated there by the Russians in May 1945.

He was brought to England in August 1945, arriving as one of ‘The Boys’ in a British bomber, flying from Prague. After hostels in Windermere and London, he started a new life and became a furrier in central London, with his own business in partnership with another one of The Boys.

The square represents his family: his beloved wife of more than 50 years Ida and his children Helen and David. The square was chosen as it signifies the continuation of life, emerging from the horrors of the Holocaust and the indomitable spirit and courage of our hero and a wonderful man – Dad.