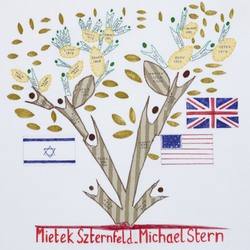 Moszek and Fajga Szternfeld lived in Zgierz and had four sons: Bolek (b1924), Mietek, my dad (b1927), Jakob (b1930) and Falk (b1934). Mietek’s childhood memories revolved around his grandmother Sarah and horse riding with his father, wearing his treasured riding boots.The whole family was registered in the Lodz ghetto in 1941. His parents died in 1942. His two younger brothers may also have perished then but no record has yet been found.
Bolek and Mietek were sent to different slave labour camps, not meeting again until 1944, when they were on the same train to Auschwitz. They agreed to jump: Mietek succeeded, Bolek didn’t and dad believed his older brother died that year. Surviving this train escape he was eventually recaptured, taken to Buchenwald and then Theresienstadt where he was liberated in May 1945. Overcoming typhoid, Mietek was lucky enough to be on the first RAF plane of survivors allowed into the UK.

Life began again in Windermere and subsequently Montford Hall, where he met his future wife, Marion Maxfield. Before that happened, the Red Cross arranged for Mietek to join an uncle, that he didn’t know, in the USA, but they did not gel and he left to join the US Army.

Now a US citizen, Michael Stern travelled back to the UK and married Marion in 1951. They lived first in the USA, returning to England in 1956, and lived close to Montford Hall.

In 1958, Michael discovered that Bolek had actually survived. He lived near Tel Aviv with his wife Itka (another survivor) and their three children.
A massive heart attack killed my dad on Yom Kippur 1995. Never overtly religious, he prayed for his family and gave thanks for his life every single day. He left behind a loving wife, an eternally grateful son, a caring daughter-in-law and two beautiful granddaughters.