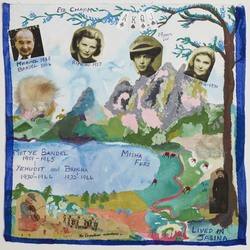 This square was made for my husband, Michael Bandel (Yechiel Mechel Tvi). He is shown together with his elder sister (who is still alive and lives in Israel, as at December 2014) and his late mother. His father

and two younger sisters were murdered during the Holocaust.

He arrived in England in summer 1946 as a child survivor of the concentration camps and eventually learnt English, established himself as a furrier, married and raised two children and had four grandchildren.

He was born in a small border village in Czechoslovakia called Jasina – pronounced Yasina – in the shadow of the Carpathian Mountains. His family were followers of the Vishnitzer Rebbe and his lifestyle was very much in that way, a lot like “Fiddler on the Roof” – freezing in the winter, snow-capped mountains all year round, the river Tiza nearby. They would go to the peasants his late father eventually had his own small workshop and was very skilled in his craft and also extremely well-respected, both as a furrier and as an honest and upright businessman and gentleman.

In 1958 Michael and I got married. We had two children, Martin and Gaynor who later married Amanda and Daniel. We then became very proud grandparents to Lauren, Alana, Sabrina and Marc.

This square was painted by his grand-daughter Sabrina Bandel.