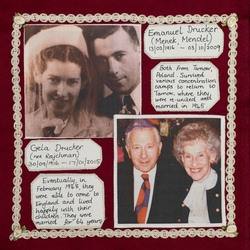 Our father Menek Drucker was born on 13th February 1916 in Rzeszow, Poland. In September 1940 he was taken to Pustkow, originally a German Labour camp which became a concentration camp. In June 1944 he was taken to Auschwitz-Birkenau.

Our mother Gela Rajchman was born on 30th September 1916 Pacanow, Poland. In 1939 She was taken to the Tarnow ghetto. In 1942 she was sent to Plaszow concentration camp, then in 1944 to Czestocova.

On being liberated at the end of the war, Gela and Menek met en route whilst making their way back to their home town of Tarnow – they had known each other before the war. They married in June 1945 in Tarnow, having to borrow clothes for the occasion.

Having both lost nearly all their families, they clung to the hope that they would find Gela’s brother who had come to England in 1938. After two long years of bureaucracy and heartache they were successful and arrived in London one cold day in February 1948,together with their 20 month old daughter.

Our square which shows their smiling faces is evidence that, in spite of the horrors they had undergone, they succeeded in creating a happy, secure and loving home for their daughter Rosalind and son Henry. Menek lived to the age of 93 and Gela to the age of 98, that says it all… true survivors!