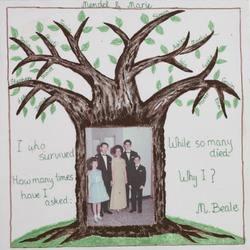 My grandpa, Mendel Beale, was born in December 1921 in a small village outside of Lodz, Poland. He was 18 years old when German troops marched into Lodz and his family was locked up in the Lodz ghetto and forced to work in the labour factories. It was there that his sister Fayga died from typhoid.

Then, in the summer of 1944, as the Russian forces closed on Lodz, thousands of Jews including my grandpa, his father Zelig, mother Tauba and sister Rachel were herded onto cattle trucks and taken to Auschwitz.

Incredibly my grandpa survived but tragically his family all died. He was finally liberated by Russian troops in the final stages of the war and then travelled across Eastern Europe desperately searching for family members. In September 1946 he finally made it to England

where he started a new life in Manchester. He dedicated much of the rest of his life to helping others who had survived the Holocaust and in educating people in the story and lessons of the Holocaust.

The idea behind the tree on the square had many reasons to it but mainly to just that of Mendel and his wife Marie, but also their legacy – children, grandchildren and great-grandchildren. The aim was also to represent the solid and deep roots that Mendel laid in Manchester after surviving the atrocities of the Holocaust. He became a successful family man and his history, morals and values still play an intrinsic part in his family’s upbringing. Mendel was by all accounts also a philosophical man who often asked himself existential questions, both when telling his tale or writing it down in prose and poetry. One question was most prominent on his mind: “Why did I survive, when so many others died?” We think that one look at this square shows the answer.

Jamie and Sofia Beale and the entire Beale family