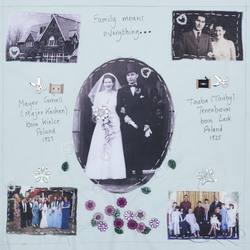 Mayer Cornell (Majer Kochen) was born in March 1927 to Yehaskial and Chaja Rivka in Kielce Poland. Mayer was the middle of 3 children sandwiched between Rosa and Yisroel Bear born to this Chassidic couple. At the start of WW2 the

family were herded into the Kielce ghetto. The ghetto was liquidated in 1942 leaving Mayer aged 15 alone in the world. He endured transportation to Hassag Kielce, Czenstchowa, Buchenwald, Reimsdorf, a ‘Death March’ and was finally liberated from Theresienstadt on 8th May 1945. He chose to join the transit to the UK of the 700+ displaced Jewish youth who became immortalised as ‘The Boys’ in the book published by Sir Martin Gilbert. Mayer flew from Prague aboard a Lancaster bomber to Crosby in the Lake District in August 1945 and made a new and successful life for himself in London.

Family was what was most important to Mayer and forms the theme of his memory square. He mourned his birth family but loved and cherished the one he(Tauba Tenenbaum), a fellow survivor from Lask, Poland.

When Tauba moved to Quare Mead in 1949 Mayer met her from the train and there began a love story that led to marriage in 1953 and an enduring bond lasting over 60 years. The square depicts the love and devotion they had for each other and the family they created: their daughters Marilyn and Cherry, their sons-in-law Martin Gilbert and Sheldon Reback and their adored, precious grandchildren Paul, Victoria, Talia, Tanya (Gilbert), Gilad, Liat and Shani (Reback).

The recent marriage of Victoria to Dov Staszlewski, blessed by Mayer as a Cohen heralded a new exciting chapter; the promise of another generation to add to the family that was so nearly extinguished in the flames of the Shoah.