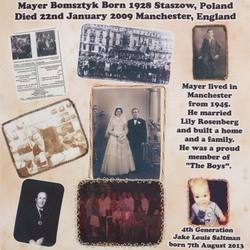 Mayer Bomsztyk was born on 28th December 1928 in Staszow, Poland. He was the youngest of 3 children and had an older brother and sister. His father had died before the war and his mother ran a leather shop which was her family business. Mayer was part of a large extended family with many cousins, aunts and uncles.

In 1941 Mayer went into hiding in the basement of a neighbour’s home. The neighbours gave the family up to the Germans and the family was separated. Mayer’s mother Yenta Bayla, together with his sister Hela were sent to a series of camps and ended up in Bergen Belsen. Yenta Bayla died in Belsen but Hela survived the war. His brother Joshua was sent into the Polish army, in the belief that he would be saved. Joshua was never heard of again. Mayer aged 12 was taken with a work unit to Kielce and he worked in a munitions factory and following forced marches and work camps he ended up in Buchenwald in 1945, from where he was liberated.

Mayer was taken to Theresienstadt where he became one of the first group of three hundred plus children who were to become “The Boys”.

He was taken to Windermere in August 1945 where the recuperation began. This square represents the life which Mayer built after he was sent to a hostel in Manchester. He began working life as an apprentice to a furrier and then went into business as a handbag manufacturer. He joined a golf club and became Captain in 1980 and he also enjoyed playing bridge. In 1956 Mayer married Lily Rosenberg and they went on to have 3 children.

Mayer passed away on Thursday 22nd January 2009, leaving behind the family of which he was so proud, a wife, 3 children and 10 grandchildren. The final picture is of Jake Louis Saltman (Yaakov Meir) who was born on 7th August 2013. Lily died on 18th September 2008 and Mayer died a few weeks later on 22nd January 2009. They are both sorely missed.