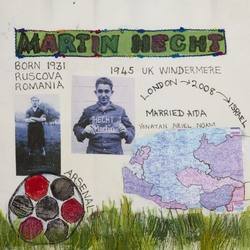 I was born in Ruscova, Romania in 1931. During the spring of 1944, together with my parents and brothers and sister we were sent to the ghetto of Viseu de Sus. After a few weeks we were transported to Auschwitz. After the separation from my parents (they died in the gas chambers), my brothers and I were sent to several slave labour camps, then to the concentration camp Flossenbürg, followed by death marches. I was liberated in 1945 and sent for rehabilitation to Indersdorf near Dachau, Bavaria.

After a few months, I was transferred to England to a hostel in Manchester. I then eventually moved to London.

The square shows me has a young boy after the war and my favourite football team, Arsenal!