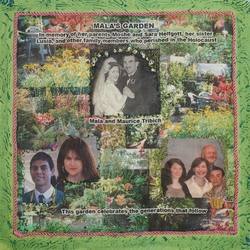 I was born on 24th September 1930 in Piotrkow Trybunalski, Poland, the middle child of three, with an older brother Ben and a younger sister Lusia. I enjoyed a normal happy life in a loving family until the German Army invaded Poland on 1st September 1939, when my world collapsed. During the next five and a half years I survived life in a ghetto, as a hidden child, as a slave labourer, and in November 1944 was deported to Ravensbruck concentration camp, and subsequently to Bergen Belsen. There I was very ill with typhus when liberated by the British army on 15th April 1945.

In July 1945 I was sent with a group of children to Sweden for rehabilitation. There I learned that Ben was the only other survivor of my family, and we were reunited in England in March 1947. Soon after arriving I enrolled at secretarial college, and within one year I had started work and was self-supporting. In 1950 I married Maurice Tribich, an architect; we had two children, and three grandchildren. When my children were in their teens I took a full time course at London University and gained a BSc (Hons) in Sociology.

My panel shows foliage and flowers on my roof garden, exactly as the title says, and is both a memorial to my parents and sister Lusia and also a celebration of the younger generations and the seasonal renewal of life. Sadly, Maurice died some years ago. My children’s photos are grouped as follows: left – my daughter Shannon and her son Declan; right – my son Jeffrey, Naomi, and their children Miriam and Samuel.