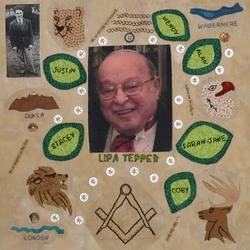 My father was Lipa Tepper. He was born on Nov 30 1926 in Dukla in the south of Poland. He was taken aged 13 from his family and spent numerous years in multiple camps including: Buchenwald, Schlieben, Czestochowa, Jeruzolimska, Skarżysko-Kamienna Theresienstadt. He was finally liberated from hell in 1945 and taken to England as one of The Boys.

He started a new and unimaginable life and prospered in haberdashery, married and had children. The square represents all he loved and flourished alongside. He died peacefully on July 2 2006 surrounded by his family. Two weeks before that, his final words to his eldest son were: Live the life you’ve got.

As the name ‘Lipa’ is Polish for lime tree, the names of Lipa’s loved ones have been embroidered onto fabric limes. Lipa was a Freemason. The Freemason symbol, Compass and Square, has several interpretations, one being that it spells out the word LAO (LEO) meaning lion. Lipa’s English name was Leopold, a name often abbreviated to Leo. The square features a lion as well as three other creatures because a young Lipa was taught a saying by his father in Poland. “Be as strong as a leopard, as light as an eagle, run like the deer and be as mighty as the lion to do the bidding of your Father in heaven.” The square also represents Lipa’s journey from Poland to England. Marking this journey are buttons to pay homage to Lipa’s career as a haberdasher. Chains are used in place of the written names of the camps. The first chain contains ten links for the letters in Buchenwald, below this twelve for Jeruzolimska and fourteen for Theresienstadt.