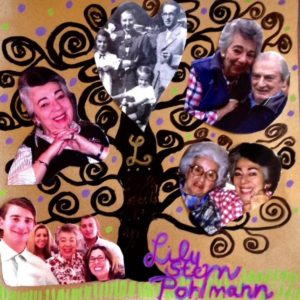 Lili was born in Lvov on March 29, 1930 and lived in Krakow, Poland with her parents Cecylia and Filip Stern and brother Uriel. Her father was a bank manager and her mother was a dress designer. As a child, she loved spending time in the main park in Krakow, riding scooters, climbing trees and eating freshly baked bread and sausages with her father. She also enjoyed family visits to Lvov and skiing holidays in Zakopane. During the Nazi occupation of Poland Lili and her family were in Lvov and only she and her mother survived.

Their lives were saved thanks to the exceptional courage and humanity of two remarkable non Jews: one was a German woman, a civil servant attached to the Nazi occupying forces in Lvov – her name was Irmgard Wieth and the other, a Ukrainian, the Greek-catholic, Archbishop Andrey Count Sheptytsky. On 29th March 1946 Lily arrived in London in the first of the three transports of Jewish children brought over from Poland by the indomitable Rabbi Dr Solomon Schonfeld, Z’l whose inexhaustible efforts to rescue the remnants of those children who survived gave them a new life and freedom in this country.

For the past 20 years, Lili has dedicated herself to building bridges between the Polish – Jewish community. Her passion for forgiveness and gratitude to the people who both persecuted and saved her, has made her a much sought after speaker, from schools to embassies. In 2007, her tireless work earned her one of Poland’s highest accolades, The Commander’s Cross of Polonia Restituta, awarded for extraordinary and distinguished service.

Lili has a lifelong deep love for opera, music and the theatre. She strives to make sure the survivors’ legacy is heard as well as those brave people who risked their lives to save Jews. She was very close to Nobel Peace Prize nominee Irena Sendler, who saved 2,500 children from the Warsaw ghetto. Lili speaks often of Mrs. Sendler’s legacy: “If Steven Spielberg would have heard of Irena Sendler first, it would have been “Sendler’s list,” not “Shindler’s list.”

Lili’s laugh is unique to her and she brings light and hope into a story that is dark and horrifying. She is adored by her daughter, Karen and her legacy… her 3 grandchildren, Corey, Daniel and Kaelin.