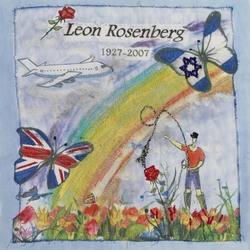 Our dear father Leon Rosenberg was born just outside of Ostrowiec, Poland, on 15th May 1927. In 1940, when he was 12, he and his family were forced to live in the Ostrowiec ghetto and shortly after, they were all transported to concentration camps at Buchenwald and then Treblinka. During 1942, he and his family were taken to Auschwitz, where he witnessed the murder of his own father. Leon was eventually liberated by the Russian army in Jan 1945 and then when he was 18, he was taken to Windermere in England. There he was taught to read, speak and write English and he was also trained to design and make furniture. He spent most of his working life in the furniture industry in London. He married Vicky Jacobson in May 1948 and they had two sons, Alan and Max. Leon sadly died in November 2007 aged 80 but just before he passed away, he told his sons that he was a lucky man and had been blessed with an extra 65 years of life. He never expected to survive Auschwitz death camp.

The rose represents the ecstasy and agony of life and also links to the name Rosenberg, which means ‘mountain of roses’. The blue sky represents a world full of light, free of clouds and free from darkness. The rainbow is a symbol of hope and optimism for the future. The butterflies at each end of the rainbow represent Israel and Britain. Leon was eternally grateful to the Government and good people of Britain who offered the survivors the unique gift of a second chance at life. Likewise he was so happy when the state of Israel was established in 1948 as a home for Jewish people.

Leon loved to travel and particularly by aeroplane as this was the ultimate feeling of freedom. For five years of his life, 1940 to 1945, he never saw a single flower and so loved gardening and growing flowers. Fishing was a favourite hobby and he especially enjoyed catching pike and carp for making gefilte fish.