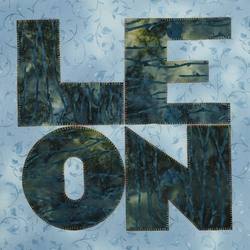 My dad was a very charismatic man. He left a great impression on everyone he met. He was a great listener and was able to delve into their deeper selves of everyone he met and people would invariably say ‘He changed my life!’

My square is based on the Love, Ahava sculpture which is in the Israel Museum in Jerusalem. I took the letters of his name and upon my daughter’s suggestion, chose blue and green as the colour theme. In fact all his cars were the same colours. He was modest and self taught. He liked people and nature very much. He loved the outdoors and our lovely garden. The impression of my quilt square is solid and not fussy, as he was… to the point. In fact I didn’t know his story as, for various reasons, he was unable to pass it on and burden his family with the great pain, loss and hardship of his youth. So it was only when he sadly passed away that mum found his diary enlightening us as to his story. This square with his name is simply what I chose to do. He had to create a new life all on his own. Each great grandchild since has been named after him as he was so special! Perhaps there’s a spark of him in further generations.

I’m his daughter who he was proud of, in the respect that I made Aliya many years ago. His greatest love, after my mum and his family, was certainly Israel where he was laid to rest in Jerusalem.